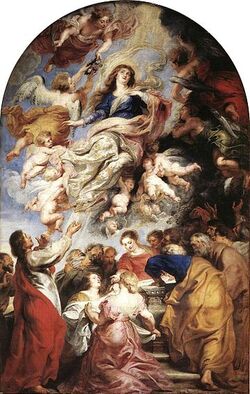 The Assumption of the Blessed Virgin Mary

Scripture does not contain an account of Mary’s Assumption into heaven. However, Revelation 12 speaks of a woman who is caught up in the battle between good and evil.  Some see this woman as God’s people. but Mary best embodies the people of both Old and New Testament and her Assumption can be seen as a type of the woman’s victory.

Belief in Mary's Assumption comes from the Tradition of the early Church, for example, the first century work  Books of Divine Names, attributed to St. Denis the Aeropagite, who records an account of a said Hierotheus, who claimed that all the apostles had been divinely alerted to the impending death of Mary and rushed to be with her, only St. Thomas failing to arrive in time.  She was buried, but when St. Thomas arrived, he asked to see her body, but when the tomb was opened, they found only her burial shroud and flowers.

The bodies of Apostles and Martyrs who shed their blood for Christ have been preserved and venerated in the Church from the beginning of Christianity.  The remains of St. Peter and Paul are preserved in Rome, but no Christian city or center has ever claimed to possess a bone or any other remain of the Blessed Virgin, which would have been of far greater value and no skeptic has ever found the body of Our Lady, though many have looked for it.

​Scripture records that Old Testament saint Enoch, "walked with God; and he was not, for God took him" (Genesis 5:24) and likewise, Elijah, was taken up to heaven in a fiery chariot (2 Chronicles 2: 1-13).  Some also believe this was the case for Moses since he appeared at the Transfiguration of Christ with Elijah.  As Australian theologian Robert Haddad has written, "The Immaculate Conception, formed by the Holy Spirit, and which formed the Body of Christ, would not be allowed to see corruption."  Her Assumption is "a singular participation in her Son's Resurrection and an anticipation of the resurrection of other Christians" (CCC, 966).

One of the earliest Christian Traditions is of the Dormition, in which Mary is like Enoch and Elijah, assumed bodily into heaven.  Song of Songs is said to refer to Mary's Assumption with verse 2:4, "He has taken me to the banquet hall, and his banner over me is love."  Jesus' banquet hall is heaven. Jesus' exhortations to Mary to "come with me" are also a reference to her assumption (see verse 4:8).  Psalm 16 tells us that God will not permit his holy one to see decay. This refers in the first instance to Christ, but also to Mary.  Like Adam and Eve, she was created without sin because of the role God destined for her as Mother of our Blessed Lord.

Pope Francis said Mary, who is one of us, is "the Gate of heaven,"  as a spiritual mother waiting for her children and giving us hope.  In a homily on the Assumption he said that:

“The Mother’s humanity is 'attracted' by the Son in his own passage from death to life. Once and for all, Jesus entered into eternal life with all the humanity he had drawn from Mary; and she, the Mother, who followed him faithfully throughout her life, followed him with her heart, and entered with him into eternal life which we also call heaven, paradise, the Father’s house.”

Pope Benedict XVI said,
“By contemplating Mary in heavenly glory, we understand that the earth is not the definitive homeland for us either, and that if we live with our gaze fixed on eternal goods we will one day share in this same glory and the earth will become more beautiful. Consequently, we must not lose our serenity and peace even amid the thousands of daily difficulties. The luminous sign of Our Lady taken up into Heaven shines out even more brightly when sad shadows of suffering and violence seem to loom on the horizon.”

"We may be sure of it: from on high, Mary follows our footsteps with gentle concern, dispels the gloom in moments of darkness and distress, reassures us with her motherly hand. Supported by awareness of this, let us continue confidently on our path of Christian commitment wherever Providence may lead us. Let us forge ahead in our lives under Mary's guidance".
​
— Pope Benedict XVI, General Audience at Castel Gandolfo Aug. 16, 2006