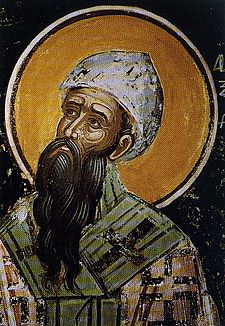 
St. Cyril was born in Theodosius, Egypt in 376 A.D. He was well educated and had an excellent knowledge of grammar and rhetoric, the humanities and theology and biblical studies.
We pick up his life in Alexandria, Egypt where he became a monk, served the Archbishop Theophilus and succeeded him as Archbishop in the fifth century.


He was Patriarch from 412-444, and early in his career was apparently involved in the violent suppression of Novatian churches (which had broken off from the Catholic Church and were in heresy) and expelling the Jews of the city after a massacre of Christians.


Despite this inauspicious beginning, St. Cyril is known for his writings and work during the time of the Nestorian heresy. It was he who championed the cause of Church and the Blessed Mother against the heretical doctrines of the Archdeacon Nestorius of Constantinople.


In 428 Nestorius, a monk of Antioch and powerful preacher, became the Bishop of Constantinople. He rejected the position that Mary was the “Mother of God,” which he considered a confusion of the divine and human natures of Christ. He believed that God dwelt in Christ as in a temple and that he became God only by degrees. Thus, he taught there were two persons in Christ [instead of two natures in one divine person]. This caused a tremendous stir in the faithful, who felt this dishonor of Mary acutely. He had the monks of Constantinople imprisoned and scourged for daring to protest his actions.

St. Cyril, Bishop of Alexandria, when he heard of this said, "I am astonished that the question should ever have been raised that the Holy Virgin should ever have been called Mother of God, for it really amounts to asking, is her Son God, or is he not?"
He wrote a paschal letter to the monks of Egypt against the position of Nestorius in 429. He also initiated a correspondence with Nestorius in an effort to turn him towards the truth.


The Alexandrians understood that when they used terms like "Theotokos" that though Mary was the Mother of God, she did not bear his divinity, but because she bore the person of Christ [Christokos], it is legitimate to refer to her in this way.
Cyril rejected Nestorius’ position and called for a Council to settle this at Ephesus in 431 with the blessing of Pope Celestine, who considered him the most important prelate in the East and the inheritor of the traditions of St. Athanasius and St. Peter.

Cyril wrote to Pope St. Celestine, since ancient custom, he says, persuaded him to bring the matter before the pope. Pope Celestine empowered him as his legate with authority to admonish Nestorius that he if failed to recant within ten days of the receipt of this warning, he would be separated from the “body” of the Church and Cyril was given authority “to provide for” the Church at Constantinople.Cyril wrote to Nestorius a third time giving him 12 proposition to declare anathema. He also wrote to John, Patriarch of Antioch, to insure he was on the right side, and got him to agree.

The Emperor convoked the Council of Ephesus but Nestorius thrice refused to appear. Before Ephesus was over, 15 Bishops favoring Nestorius’ position were also deposed along with Nestorius thanks to the leadership of Cyril, Patriarch of Alexandria.
The papal legates from Rome arrived late but approved the decisions. John, Patriarch of Antioch, also arrived late and held a rival council with 43 bishops deposing Cyril and Memon, Bishop of Ephesus, but later reconciled with St. Cyril.

St. Cyril’s second letter to Nestorius was approved by the Council of Ephesus and many subsequent councils. He also wrote many works such as Commentaries on the Old Testament, [32] Thesaurus, Discourse Against Arians, Commentary on St. John's Gospel,[33] and Dialogues on the Trinity.

According to the Catholic Encyclopedia online, “St. Cyril taught the personal, or hypostatic, union in the plainest terms; and when his writings are surveyed as a whole, it becomes certain that he always held the true view, that the one Christ has two perfect and distinct natures, Divine and human.”

​Sadly, the whole of his patriarchy fell away from the Church several years after his death, in part, misusing some of his writings. He, however, is considered a Doctor of the Church. St. Cyril pray for us.