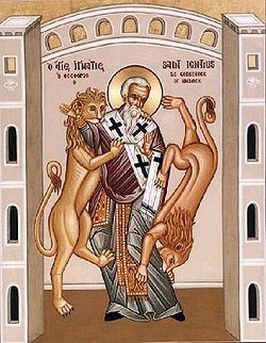 Icon of the martyrdom of Saint Ignatius
The Fathers of the Church spread the gospel of Jesus Christ, defended the Church in apologetic writing and fought the many heresies of the first six centuries of Christianity. These men, also called Apostolic Fathers, gave special witness to the faith, some dying the death of a martyr. Like Jesus who referred to Abraham as a spiritual father (Luke 16: 24) and St. Paul, who referred to himself in the same terms (1 Corinthians 4: 15), the Fathers were zealous for the word of God. Their writings are a testimony to the faith of the early Church, yet many Christians are unfamiliar with the work of Clement of Rome, Ignatius of Antioch, Polycarp of Smyrna, Justin the Martyr, Irenaeus, Tertullian, Origen, Cyprian of Carthage, Athanasius, Ephraim, Cyril of Jerusalem, Hilary of Poitiers or Gregory the Great to name of few of the early Fathers. Periodically we will provide biographical information and examples of the writing of these great men of faith. This page will focus on the great St. Ignatius of Antioch.

St. Ignatius of Antioch was the third bishop of Antioch and considered an apostolic Father because he heard the Apostle John preach. He is thought to have been ordained by St. Peter according to the ancient text of Theodoret ("Dial. Immutab.", I, iv, 33a, Paris, 1642). About 110 A.D. he was sentenced to a martyr's death in the arena by the Emperor Trajan. He refused to remain silent in the face of an order by the Emperor to worship their pagan gods under penalty of death.  He died a soldier of Christ.  On the journey to Rome and his martyrdom he wrote seven pastoral letters, which are his only surviving letters. They are addressed to Christian communities at Ephesus, Magnesia, Tralles, Rome, Philadelphia and Smyrna, including a personal one to Bishop Polycarp of Smyrna. The authenticity of the letters is universally accepted by Catholic and Protestant scholars. Excerpts from his letters depict a Church with great authority:

Chapter 20
"I will [send you further explanations] especially if the Lord should reveal to me that all of you to a man, through grace derived from the Name, join in union meeting in one faith, and in Jesus Christ, who was of the family of David according to the flesh, the Son of Man and the Son of God, so that you give ear to the bishop and to the presbytery with an undivided mind, breaking one Bread, which is the medicine of immortality, the antidote against death, enabling us to live forever in Jesus Christ."

Chapter 13
" Indeed, when you submit to the bishop as you would to Jesus Christ, it is clear to me that you are living not in the manner of men but as Jesus Christ, who died for us, that through faith in His death you might escape dying. It is necessary, therefore,--and such is your practice,--that you do nothing without the bishop, and that you be subject also to the presbytery, as to the Apostles of Jesus Christ our hope, in whom we shall be found, if we live in Him."

Chapter 2
"In like manner let everyone respect the deacons as they would respect Jesus Christ, and just as they respect the bishop as a type of the Father, and the presbyters [priests] as the council of God and college of Apostles. Without these, it cannot be called a Church."

Letter to the Romans

Chapter 4
"I am writing to all the Churches and I enjoin all, that I am dying willingly for God's sake, if only you do not prevent it. I beg of you, do not do me an untimely kindness. Allow me to be eaten by the beasts, which are my way of reaching to God. I am God's wheat, and I am to be ground by the teeth of wild beasts, so that I may become the pure bread of Christ."

Letter to the Philadelphians
Chapter 3
"Those indeed, who belong to God and to Jesus Christ--they are with the bishop. And those who repent and come to the unity of the Church--they too shall be of God. . . Do not err my brethren: if anyone follow a schismatic, he will not inherit the Kingdom of God. . . .  Take care, then, to use one Eucharist, so that whatever you do, you do according to God: for there is one Flesh of our Lord Jesus Christ, and one cup in the union of His Blood; one altar as there is one bishop with the presbytery and my fellow servants, the deacons."

Letter to the Smyrnaeans (110 A.D.)
Chapter 6
"Take note of those who hold heterodox opinions on the grace of Jesus Christ, which has come to us, and see how contrary their opinions are to the mind of God. . . . [7, 2] They abstain from the Eucharist and from prayer, because they do not confess that the Eucharist is the Flesh of our Savior Jesus Christ, Flesh which suffered for our sins and which the Father, in His goodness, raised up again. They who deny the gift of God are perishing in their disputes." [He is opposing the Docetist heresy]

Chapter 8
"Let only that Eucharist be regarded as legitimate, which is celebrated under [the presidency of] the bishop or him whom he has entrusted it."