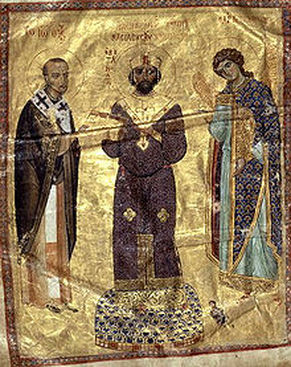 [3, 6, 190] "The priests of Judaism had power to cleanse the body of leprosy--or rather, not to cleanse it at all, but to declare a person as having been cleansed [by God, see Lev 14: 2-3]. And you know how much contention there was even in those times to obtain the priestly office. Our priests have received the power not of treating with the leprosy of the body, but with spiritual uncleanness; not of declaring cleansed, but of actually cleansing. [forgiving sins in Christ's name]. . . . God has given to priest powers greater than those given to our parents; and the differences between the powers of these two is as great as the difference between the future life and the present. [195] Our parents begot us to temporal existence; priests beget us to the eternal. The former are not able to ward off from their children the sting of death, nor prevent the attack of disease; yet the latter often gave the sick and perishing soul--sometimes by imposing a lighter penance, sometimes by preventing the fall. Priests accomplish this not only by teaching and admonishing, but also with the help of prayer. [196] Not only at the time of our regeneration [in Baptism], but even afterward, they have the authority to forgive sins. 'Is there anyone among you sick? Let him call in the priests [Gr. presbyteros is the root word for priest in English] of the church, and let them pray over him, anointing him with oil in the name of the Lord. And the prayer of faith shall save the sick man, and the Lord shall raise him up, and if he has committed sins, he shall be forgiven" [James 5:14-15].

"They who inhabit the earth, they who make their abode among men, are entrusted with the dispensation of the things of heaven!  Priests have received a power which God has given neither to angels nor to archangels.  It was said to them: 'Whatsoever you shall bind upon earth shall be bound in heaven; and whatsoever you shall loose, shall be loosed' [Mt 18: 18].  Temporal rulers have indeed the power of binding; but they can bind only the body.  Priests, however, can bind with a bond which pertains to the soul itself; and transcends the very heavens.  Whatever the priests do here on earth, God will confirm in heaven, just as the master ratifies the decisions of his servants.  Did He not give them all the powers of heaven?  'Whose sins you shall forgive,'  He says, 'they are forgiven them:  whose sins you shall retain they are retained.' [John 20: 23]  What greater power is there than this?  The Father has given all the judgment to the Son [John 5:22].  And now I see the Son placing all this power in the hands of men.  They are raised to this dignity as if they were already gathered up to heaven, elevated above human nature, and freed of its limitations." (The Priesthood 3:5 [A.D. 387]).

[46, 3)] "We have become one body, and 'limbs of His flesh and of His bones.' Let those who are initiated [baptized] understand what I am saying. So that we may become this not by love only but even in every deed, let us be blended into that flesh. This blending is effected by the Food [Eucharist] which He has given, in His desire to demonstrate to us the fond love that He has for us. That is why He has commingled Himself with us [in Communion], and has kneaded up His body into us, so that we might subsist as a kind of unit, like a body joined to a head.

Homily on the First Epistle to the Corinthians [392 A.D.]

[24, 1 (3)] "The cup of blessing which we bless, is it not a communion of the Blood of Christ? (1 Cor 10:16) Very trustworthy and awesomely does he say it. For what he [St. Paul] is saying is this: 'What is in the cup is that which flowed from His side, and we partake of it.' He called it a cup of blessing because when we hold it in our hands that is how we praise Him in song, wondering and astonished at His indescribable Gift, blessing Him because of His having poured out this very Gift so that we may not remain in error; and not only for His having poured It out, but also for His sharing It with all of us. 'If therefore you desire blood,' He says, 'do not redden the platform of idols with the slaughter of dumb beasts, but My altar of sacrifice with My Blood.' What is more awesome than this? What, pray tell, more tenderly loving?"

[24, 2 (3)] "In ancient times, because men were very imperfect, God did not scorn to receive the blood which they were offering to idols. He did this to draw them away from those idols; and this very thing again because of His indescribable, tender affection. But now He has transferred the priestly action to what is most awesome and magnificent. He has changed the sacrifice itself, and instead of the butchering of dumb beasts, He commands the offering up of Himself."

[24, 2 (4)] "'Because the Bread is one, we, the many, are in one Body' (1 Cor 10:17). 'Why do I say communion?' he says; 'for we are that very Body.' What is the Bread? The Body of Christ! What do they become who are partakers therein? The Body of Christ! Not many bodies, but one Body. For just as the bread, consisting of many grains, is made one, and the grains are no longer evident, but still exist, though their distinction is not apparent in their conjunction; so too are we conjoined to each other and to Christ. For you are not nourished by one Body while someone else is nourished by another Body; rather, all are nourished by the same Body."

[24, 4 (7)] "When you see [the Body of Christ] lying on the altar, say to yourself, 'Because of this Body I am no longer earth and ash, no longer a prisoner, but free. Because of this Body I hope for heaven, and I hope to receive the good things that are in heaven, immortal life, the lot of the angels, familiar conversation with Christ. This body, scourged and crucified, has not been fetched by death . . . . This is that Body which was blood-stained, which was pierced by a lance, and from which gushed forth those saving fountains, one of blood and the other of water [symbolizing the sacraments of Communion or the Eucharist and Baptism] , for the world.' . . . This is the Body which He gave us, both to hold in reserve [for worship] and to eat, which was appropriate to intense love; for those whom we kiss with abandon we often even bite with our teeth.

[82, 4] "Let us therefore in all respects put our faith in God and contradict Him in nothing, even if what is said seems to be contrary to our reasoning and to what we see. Let His word be of superior authority to reason and sight. This too be our practice in respect of the Mysteries [Sacrament of Eucharist or Communion], not looking upon what is laid before us, but taking heed also of His words. For words cannot deceive; but our senses are easily cheated. His word has never failed; our senses err most of the time."
"When the word says, 'This is my Body,' be convinced of it and believe it, and look at it with the eyes of the mind. For Christ did not give us something tangible, but even in His tangible things all is intellectual. So too with Baptism: the gift is bestowed through what is a tangible thing, water, but what is accomplished is intellectually perceived: the birth and the renewal. If you were incorporeal He would have given you those incorporeal gifts naked; but since the soul is intertwined with the body, He hands over to you in tangible things, that which is perceived intellectually. How many now say, 'I wish I could see His shape [Gr. ton tupon], His appearance, His garments, His scandals.' Only look! You see Him! You touch Him. You eat Him. He had given to those who desire Him, not only to see Him and fix their teeth in His flesh, and to embrace Him and satisfy all their love."

[82, 5] "Think how indignant you are against the traitor, against those who crucified Him. Take care, then, lest you too become guilty of the Body and Blood of Christ. They slaughtered His most holy body; but you, after such great benefits, receive Him into a filthy soul. For it was not enough for Him to be made Man, to be struck and to be slaughtered, but He even mingles Himself with us; and this not by faith only, but even in every deed He makes us His Body [Chrysostom is referring not to the Church but the effect of receiving His Body in the Eucharistic sacrifice of the Mass]. How very pure, then, ought he not be, who enjoys the benefits of this Sacrifice?

"The Two Become One Flesh"
quoted from Living the Mysteries: A Guide for Unfinished Christians, pp. 213-215 by Scott Hahn and Mike Aquilina

"What then?   Is marriage a theater?  No! It is a mystery and a symbol of something mighty.  Even if you don't show it honor, then honor, what it symbolizes.  "This mystery," says St. Paul,  is a profound one and I am saying that it refers to Christ and the Church" (Eph 5:32).

"What do we learn from this?  That the power of the union is mighty.  The wisdom of God, in the beginning, divided the one in two; but He wanted to show that it remained one even after division.  So He made it impossible for either alone to be enough for procreation.  For neither can be one until united with the other.  Each is only half.  Each alone can produce no children."

"Do you see the mystery of marriage?  He made one form one and after He made these two into one, He made one, so that now, also, children are produced from one.  For husband and wife are not two, but one.  This may be confirmed from many sources; for instance, from the words, 'male and female he created them" (Gen 1: 27).  If the head and she the body, how are they two?  From the very fashioning of the body, one may see that they are one, for she was made from his side, and they are two halves."

"And how do they become one flesh?  As if she were pure gold receiving pure gold, so the woman receives the man's seed.  She nourishes it and cherishes it and adds her own share, the two fused by pleasure.  And so she gives it back as a child!"

"The child is a sort of bridge, so that the three become one flesh, the child connecting, on either side, each to the other.  Two cities though divided by a river, become one if a bridge connects them.  How much more, then, if the very bridge is formed of the substance of each."

"So I shall tell you how marriage is a mystery of the Church.  The Church was made from Christ's side and He united with her in spiritual union.  For one man said, 'I bethrothed you to Christ to present you as a true bride to her one husband.' (1 Cor 11: 2).  And he goes on to say that 'we are members of His body'  (Eph 5:30). "

"Think about all these things, then, and let's not cast shame upon so great a mystery.  Marriage is a symbol of the presence of Christ.  Tell me: if you saw an image of the king, would you dishonor it?  By no means."