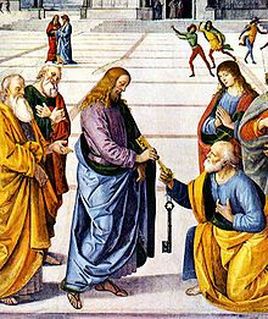 " Now when Jesus came into the district of Caesarea Philippi, he asked his disciples, “Who do men say that the Son of man is?” And they said, “Some say John the Baptist, others say Elijah, and others Jeremiah or one of the prophets.” He said to them, “But who do you say that I am?” Simon Peter replied, “You are the Christ, the Son of the living God.” And Jesus answered him, “Blessed are you, Simon Bar-Jona! For flesh and blood has not revealed this to you, but my Father who is in heaven. And I tell you, you are Peter, and on this rock [see John 1:42] I will build my church, and the powers of death [i.e., gates of hell] shall not prevail against it. I will give you the keys of the kingdom of heaven, and whatever you bind on earth shall be bound in heaven, and whatever you loose on earth shall be loosed in heaven.” [See Isaiah 22:20 and Revelation 3:7 for a better understanding of the significance of the keys].

"Amen I say to you, whatsoever you shall bind upon earth, shall be bound also in heaven; and whatsoever you shall loose upon earth, shall be loosed also in heaven." [Note: "Binding and loosing" are rabbinical terms which mean to teach with authority from God and require other believers to comply. This authority was given to Peter in his role as Christ's vicar first and then to the Apostles in communion with him].

The Power to Forgive Sins (John 20:19-23) : Jesus, in His first appearance after His Resurrection, speaks:

On the evening of that day, the first day of the week, the doors being shut where the disciples were, for fear of the Jews, Jesus came and stood among them and said to them, "Peace be with you." When he had said this, he showed them his hands and his side. Then the disciples were glad when they saw the Lord. Jesus said to them again, "Peace be with you. As the Father has sent me, even so I send you." And when he had said this, he breathed on them, and said to them, "Receive the Holy Spirit. If you forgive the sins of any, they are forgiven; if you retain the sins of any, they are retained."

The Great Commission (Matthew 28: 16-20)
"Now the eleven disciples went to Galilee, to the mountain to which Jesus had directed them. And when they saw him they worshipped him; but some doubted. And Jesus came and said to them, 'All authority in heaven and on earth has been given to me. Go therefore and make disciples of all nations, baptizing them in the name of the Father and of the Son and of the Holy Spirit, teaching them to observe all that I have commanded you; and lo I am with you always, to the close of the age.'" [Jesus will never abandon His Church--see Ephesians 5 to see the awesome unity of Christ with His Church compared to the one flesh bond of marriage]

"Take heed to yourselves, and to the whole flock, wherein the Holy Ghost hath placed you bishops, to rule the church of God, which he hath purchased with his own blood" (Acts. 20:28) [Note: Some translations, like the King James, use the term "overseers" or "guardians" (episkopi) but in the older Douay-Rheims version quoted here, which is based on the Latin Vulgate, the word is translated "bishops." Timothy was a bishop appointed by St. Paul-- see 1 Tim 3 and Titus 1:7. There are 186 references to bishops in the first volume of the Early Church Fathers writings alone --it is a 38 volume work used by both Protestants and Catholics].

Choosing a Successor to the Office of Bishop: From the Acts of the Apostles 1: 16-26

In those days Peter stood up among the brethren (the company of persons was in all about a hundred and twenty), and said, "Brethren, the scripture had to be fulfilled, which the Holy Spirit spoke beforehand by the mouth of David, concerning Judas who was guide to those who arrested Jesus. For he was numbered among us, and was allotted his share in this ministry. (Now this man bought a field with the reward of his wickedness; and falling headlong he burst open in the middle and all his bowels gushed out. And it became known to all the inhabitants of Jerusalem, so that the field was called in their language Akeldama, that is, Field of Blood.) For it is written in the book of Psalms, 'Let his habitation become desolate, and let there be no one to live in it;' and 'His office let another take.' [The King James version says, "and his bishopric let another take"] So one of the men who have accompanied us during all the time that the Lord Jesus went in and out among us, beginning from the baptism of John until the day when he was taken up from us—one of these men must become with us a witness to his resurrection." And they put forward two, Joseph called Barrabbas, who was surnamed Justus, and Matthias. And they prayed and said, "Lord, who knowest the hearts of all men, show which one of these two thou hast chosen to take the place in this ministry and apostleship from which Judas turned aside, to go to his own place." And they cast lots for them, and the lot fell on Matthias [Jews cast lots to select priests among the Levites, see Ne 10:34]; and he was enrolled with the eleven apostles. [This is apostolic succession!]