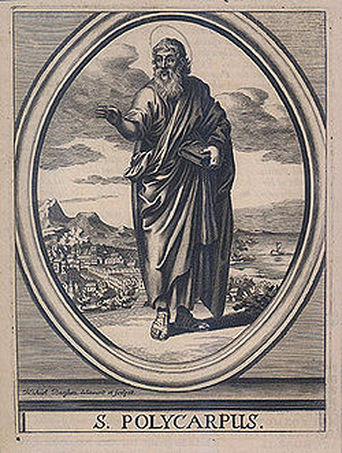 S. Polycarpus, engraving by Michael Burghers, ca 1685
The Fathers of the Church spread the gospel of Jesus Christ, defended the Church in apologetic writing and fought the many heresies of the first six centuries of Christianity. These men, also called Apostolic Fathers, gave special witness to the faith, some dying the death of a martyr. Like Jesus who referred to Abraham as a spiritual father (Luke 16: 24) and St. Paul, who referred to himself in the same terms (1 Corinthians 4: 15), the Fathers were zealous for the word of God. Their writings are a testimony to the faith of the early Church, yet many Christians are unfamiliar with the work of Clement of Rome, Ignatius of Antioch, Polycarp of Smyrna, Justin the Martyr, Irenaeus, Tertullian, Origen, Cyprian of Carthage, Athanasius, Ephraim, Cyril of Jerusalem, Hilary of Poitiers or Gregory the Great to name of few of the early Fathers. Periodically we will provide biographical information and examples of the writing of these great men of faith. This page will focus on the great Polycarp of Smyrna.

St. Polycarp of Smyrna (69-155 A.D.) was another of the apostolic Fathers who heard the Apostle John preach and became his disciple. He received St. Ignatius when he came as a prisoner on his way to martyrdom in Rome in 110 A. D. In his letter to Polycarp, Ignatius urged him to "Give ye heed to the bishop that God may give heed to you." Polycarp subsequently became Bishop of Smyrna. St. Irenaeus praises him for his respect and devotion to tradition and sound doctrine. He may have been him whom St. John addressed in Revelation 2: 11, as the "angel of the church in Smyrna," to whom the Master says, "Be thou faithful unto death, and I will give thee a crown of life." About 155 or 156 A.D. he was sentenced to a martyr's death. Below are excerpts from his only surviving letter and from the "The Martyrdom of Polycarp," the oldest extant account of Christian martyrdom, written in the form of a letter from the Church of Symyrna to the Church of God at Philomelium in Greater Phrygia.

[Second] Letter to the Philippians (135 A.D.)
Chapter 6 [his advice to priests and laity]
"And let the presbyters be compassionate and merciful to all, bringing back those that wander, visiting all the sick, and not neglecting the widow, the orphan, or the poor, but always 'providing for that which is becoming in the sight of God and man; ' abstaining from all wrath, respect of persons, and unjust judgment; keeping far off from all covetousness, not quickly crediting [an evil report] against any one, not severe in judgment, as knowing that we are all under a debt of sin. If then we entreat the Lord to forgive us, we ought also ourselves to forgive; for we are before the eyes of our Lord and God, and 'we must all appear at the judgment-seat of Christ, and must every one give an account of himself.' Let us then serve Him in fear, and with all reverence, even as He Himself has commanded us, and as the apostles who preached the Gospel unto us, and the prophets who proclaimed beforehand the coming of the Lord [have alike taught us]. Let us be zealous in the pursuit of that which is good, keeping ourselves from causes of offence, from false brethren, and from those who in hypocrisy bear the name of the Lord, and draw away vain men into error."

Chapter 7 [the anti-Christ defined]
"'For whosoever does not confess that Jesus Christ has come in the flesh, is antichrist; ' and whosoever does not confess the testimony of the cross, is of the devil; and whosoever perverts the oracles of the Lord to his own lusts, and says that there is neither a resurrection nor a judgment, he is the first-born of Satan. Wherefore, forsaking the vanity of many, and their false doctrines, let us return to the word which has been handed down to us from the beginning; 'watching unto prayer,' and persevering in fasting; beseeching in our supplications the all-seeing God 'not to lead us into temptation ,' as the Lord has said: 'The spirit truly is willing, but the flesh is weak.'"

Chapter 13
"For I trust that ye are well versed in the Sacred Scriptures, and that nothing is hid from you; but to me this privilege is not yet granted. It is declared then in these Scriptures, 'Be ye angry, and sin not,' and, 'Let not the sun go down upon your wrath.' Happy is he who remembers this, which I believe to be the case with you. But may the God and Father of our Lord Jesus Christ, and Jesus Christ Himself, who is the Son of God, and our everlasting High Priest, build you up in faith and truth, and in all meekness, gentleness, patience, long-suffering, forbearance, and purity; and may He bestow on you a lot and portion among His saints, and on us with you, and on all that are under heaven, who shall believe in our Lord Jesus Christ, and in His Father, who 'raised Him from the dead. Pray for all the saints. Pray also for kings, and potentates, and princes, and for those that persecute and hate you, and for the enemies of the cross, that your fruit may be manifest to all, and that ye may be perfect in Him."

"The Martrydom of Saint Polycarp"
[9: 3]
[Before being burned alive] "When the [Roman] Proconsul urged him and said, 'Take the oath [to the emperor as god] and I will release you; revile Christ' Polycarp answered: 'Eighty-six years I have served Him, and He has never done wrong.' How then, should I be able to blaspheme my King who has saved me?"
[14: 3]
". . . In this way and for all things I do praise you, I do bless you, I do glorify you through the eternal and heavenly High Priest, Jesus Christ, your beloved Child: through whom be glory to you with Him and with the Holy Spirit, both now and through ages yet to come. Amen."
[15]
"When he had pronounced this amen, and so finished his prayer, those who were appointed for the purpose kindled the fire. And as the flame blazed forth in great fury, we, to whom it was given to witness it, beheld a great miracle, and have been preserved that we might report to others what then took place. For the fire, shaping itself into the form of an arch, like the sail of a ship when filled with the wind, encompassed as by a circle the body of the martyr. And he appeared within not like flesh which is burnt, but as bread that is baked, or as gold and silver glowing in a furnace. Moreover, we perceived such a sweet odour [coming from the pile], as if frankincense or some such precious spices had been smoking there."

[16]
"At length, when those wicked men perceived that his body could not be consumed by the fire, they commanded an executioner to go near and pierce him through with a dagger. And on his doing this, there came forth a dove, and a great quantity of blood, so that the fire was extinguished; and all the people wondered that there should be such a difference between the unbelievers and the elect, of whom this most admirable Polycarp was one, having in our own times been an apostolic and prophetic teacher, and bishop of the Catholic Church which is in Smyrna. For every word that went out of his mouth either has been or shall yet be accomplished."

[19]
"This, then, is the account of the blessed Polycarp, who, being the twelfth that was martyred in Smyrna (reckoning those also of Philadelphia), yet occupies a place of his own in the memory of all men, insomuch that he is everywhere spoken of by the heathen themselves. He was not merely an illustrious teacher, but also a pre-eminent martyr, whose martyrdom all desire to imitate, as having been altogether consistent with the Gospel of Christ. For, having through patience overcome the unjust governor, and thus acquired the crown of immortality, he now, with the apostles and all the righteous [in heaven], rejoicing(ly) glorifies God, even the Father, and blesses our Lord Jesus Christ, the Savior of our souls, the Governor of our bodies, and the Shepherd of the Catholic Church throughout the world."