The Didache: The Teaching of the Twelve Apostles 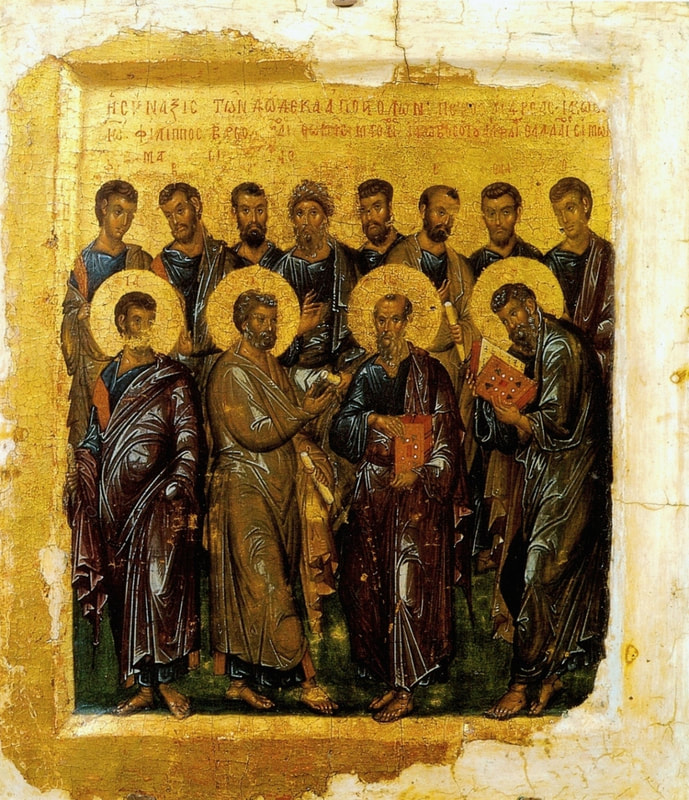 The Teaching of the (Twelve) Apostles was mentioned from the time of Athanasius in the fourth century in early Christian writing, but the text of what is now commonly referred to as the Didache, was not discovered until 1873, when it was found in the Holy Sepulcher Church at Constantinople in the Codex Hierosolymitanus (1056 A.D.). This is the only complete manuscript that we have although we do have several fragmentary manuscripts.  A copy of the complete manuscript in Georgian was discovered in 1932 in Constantinople, but has since been lost.

Most of the Didache were included in Book 7 of the Greek Apostolic Constitutions, which is from the fourth century. The Apostolic Church Order from the Ethiopian Church contains Didache 11.3-13.7 minus two articles. The first part of the Didache, that contains the Two Ways tradition, is found in documents like Barnabus 18-20, The Latin Apostolic Teaching (Doctrina Apostolorum) and in the Arabic Life of Shenoute.

It is referred to variously as an early “church manual” or “church order” that was used in the instruction of catechumens. It consists of sixteen chapters, including the Two Ways (1-6), Liturgy and Church Structure (7-15) and Apocalyptic Material (16). The author or authors (referred to as the Didachist) is/are unknown and it is thought that the document probably had a secondary editor(s). Not surprising for a document thought to have come from the earliest oral tradition going back perhaps 50 A.D., it is Jewish in tone and rooted in the Old Testament tradition, although it provides an early introduction of Christian theology for converts.  Scholars date it from 50-150 A.D.  It was probably written by disciples of the Twelve Apostles, perhaps in Syria or Egypt.

The Didache is mentioned by Eusebius after the books of Scripture (H. E., III, xxv, 4): “Let there be placed among the spuria the writing of the Acts of Paul, the so-called Shepherd and the Apocalypse of Peter, and besides these the Epistle known as that of Barnabas, and what are called the Teachings of the Apostles, and also … the Apocalypse of John, if this be thought fit."  St. Athanasius adds the "teaching" to the sapiential (wisdom)  and other deutero-canonical (second canon) books. The Didache is "the first known Christian catechesis" and provides a brief guide to Christian practice, sacraments and morality from the first century.

It speaks of the "Two Ways" of life, namely, love of God and of neighbor contrasted with the "Way of death," which is a list of the vices to be avoided. It was found in the Epistle to Barnabus, from which it quotes or paraphrases on this topic. It contains some of the earliest Eucharistic prayers and speaks of the Eucharist in chapter 9, observing:  "But let no one eat or drink of your Thanksgiving (Eucharist), but they who have been baptized into the name of the Lord; for concerning this also the Lord has said, Give not that which is holy to the dogs." (Matthew 7:6).

It uses the sacrificial language which Jesus used it at the Last Supper very deliberately as He ordained the Apostles as priests and commanded them to "Do this ( touto poiete) in remembrance [anamnesis] of me." The Didache applies the term thusia (sacrifice) to the Eucharist. It notes that "And when coming together on the Lord's own day, break bread and give thanks after confessing your transgressions. In that manner, your sacrifice will be pure."  The Catholic Answer commentary notes concerning it: "The breaking of bread and Thanksgiving [Eucharist] is on Sunday, “after you have confessed your transgressions, that your Sacrifice may be pure”, and those who are at discord must agree, for this is the clean oblation prophesied by Malachias, i, 11, 14. “Ordain therefore for yourselves bishops and deacons, worthy of the Lord … for they also minister to you the ministry of the prophets and teachers”. Notice that it is for the sacrifice that bishops and deacons are to be ordained. The last chapter (xvi) exhorts to watching and tells the signs of the end of the world." (https://www.catholic.com/encyclopedia/didache).

As in the New Testament it reflects the picture of the apostles and prophets coexisting with the ministry of a presbyter-bishop. The Didache is explicit in it condemnation of abortion.  This is consistently reflected in Catholic teaching in the early centuries. For example, the Synod of Ancyra (314 A.D.) excluded from the Eucharist (communion) any manufacturers of abortion drugs and on women who after becoming pregnant out of wedlock (before this, they were excluded until on the point of death)