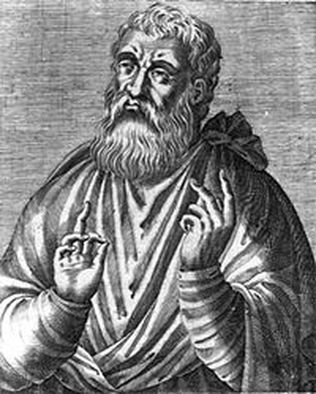 Saint Justin Martyr
The Fathers of the Church spread the gospel of Jesus Christ, defended the Church in apologetic writing and fought the many heresies of the first six centuries of Christianity. These men, also called Apostolic Fathers, gave special witness to the faith, some dying the death of a martyr. Like Jesus who referred to Abraham as a spiritual father (Luke 16: 24) and St. Paul, who referred to himself in the same terms (1 Cor 4: 15), the Fathers were zealous for the word of God. Their writings are a testimony to the faith of the early Church, yet many Christians are unfamiliar with the work of Clement of Rome, Ignatius of Antioch, Polycarp of Smyrna, Justin the Martyr, Irenaeus, Tertullian, Origen, Cyprian of Carthage, Athanasius, Ephraim, Cyril of Jerusalem, Hilary of Poitiers or Gregory the Great to name of few of the early Fathers. This site will provide biographical information and examples of the writing of these great men of faith. We will focus on Justin Martyr.

St. Justin Martyr (105-165 A.D.) was born a pagan at Flavia Neapolis in Samaria near Jacob's well somewhere between 100-110 A.D. He was well educated and traveled and is known to us mostly by his writings in defense of the faith. He has been described as "star in the West, leading its Wise Men to the cradle of Bethlehem." Before his conversion he seems to have been enamored but not satisfied with philosophies like Stoicism and Platonism.  Then one day he met an old man on the sea shore and had the Gospel proclaimed to him and realized he could have no true knowledge of God without revelation, which had been given to the prophets.  After his conversion, he put his training in philosophy to good use as an evangelist, spending some time in Ephesus and much time in Rome.  In his Dialogue with Trypho he shows how Christianity is the fulfillment of Judaism, stressing its truth.  He also wrote two Apologies addressed to the then Roman Emperors, Antoninus Pius and Marcus Aurelius in which he shows the beauty of Christianity.  In the second he writes, "'When I was a disciple of Plato', he writes, 'hearing the accusations made against the Christians and seeing them intrepid in the face of death and of all that men fear, I said to myself that it was impossible that they should be living in evil and in the love of pleasure'" (II Apol., xviii, 1). He effectively builds a bridge between Greek philosophy and Christianity using the concept of the Logos, acknowledging that the Greeks possessed it in seed form, but the fullness is found in Christianity in the person of Jesus Christ.  He spent some time in Ephesus and then taught at a Christian philosophy school in Rome.  It was in Rome where he (and some of his disciples) suffered martyrdom for his bold preaching during the reign of Marcus Aurelius. His Apologies are considered the most important of the 2d century Christian writings of the Fathers of the Early Church. It is difficult not to identify within his testimony an early version of the Catholic Mass, the president or presider being a priest [presbyteros in Greek].  His description is shown below.

Account of Justin's Death Sentence from the Second Century:  Justin was beheaded by the prefect Rusticus along with six other Christians in Rome. In an account of the interrogation of Justin by Rusticus, the latter said, "Let us come to the pressing matter at hand. Agree together and sacrifice with one accord to the gods." Justin replied, "No one who is rightly minded turns from true belief to false." Rusticus threatened, "If you do not obey, ye shall be punished without mercy." Justin said, "If we are punished for the sake of our Lord Jesus Christ we hope to be saved, for this shall be our salvation and confidence before the terrible judgment-seat of our Lord and Savior which shall judge the whole world." The other Christians agreed and Rusticus ordered that they be scourged and beheaded. [See A Treasury of Early Christianity edited by Anne Fremantle, 1953, pp. 193-196].

From the First Apology of Justin, ch. 65: An Early Description of the Catholic Mass (written about 150 A.D.) 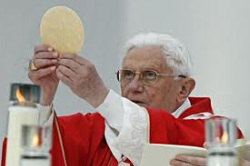 "After we have thus washed the one who has believed and has assented, we lead him to where those who are called brethren are gathered, offering prayers in common and heartily for ourselves and for the one who has been illuminated, and for all others everywhere, so that we may be accounted worthy, now even that we have learned the truth, to be found keepers of the commandments, so that we may be saved with an eternal salvation. Having concluded the prayers, we greet one another with a kiss. Then there is brought to the president of the brethren bread and a cup of water and of watered wine [the text followed by two other two genitive case terms indicating that both the water and watered wine are in the same cup], and taking them, he gives praise and glory to the Father of all, through the name of the Son and of the Holy Spirit; and he himself gives thanks at some length in order that these things may be deemed worthy.

When the prayers and thanksgiving are completed, all the people present call out their consent, saying 'Amen!' 'Amen' in the Hebrew language signifies 'so be it.' After the president has given thanks, and all the people have shouted their assent, those whom we call deacons give to each one present to partake of the Eucharistic bread and wine and water; and to those who are absent they carry away a portion.

We call this food Eucharist; and no one else is permitted to partake of it, except one who has been washed in the washing [baptism] which is for the remission of sins and for regeneration [2 Pet 3:21], and is thereby living as Christ has enjoined. For not as common bread or common drink do we receive these; but since Jesus Christ our savior was made incarnate by the word of God and had both flesh and blood for our salvation, so too, as we have been taught, the food which has been made into the Eucharist by the Eucharistic prayer set down by Him [see 1 Cor 11: 23-26; Lk 22; 19] and by the change of which our blood and flesh is nourished is both the flesh and blood of the incarnated Jesus [see John 6: 53-56].

To see the writings of another Early Church Father on the Sacrifice of the Mass, Click Here