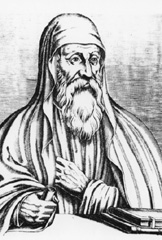 The Fathers of the Church spread the gospel of Jesus Christ, defended the Church in apologetic writing and fought the many heresies of the first six centuries of Christianity. These men, also called Apostolic Fathers, gave special witness to the faith, some dying the death of a martyr. Like Jesus who referred to Abraham as a spiritual father (Luke 16: 24) and St. Paul, who referred to himself in the same terms (1 Corinthians 4: 15), the Fathers were zealous for the word of God. Their writings are a testimony to the faith of the early Church, yet many Christians are unfamiliar with the work of Clement of Rome, Ignatius of Antioch, Polycarp of Smyrna, Justin the Martyr, Irenaeus, Tertullian, Origen, Cyprian of Carthage, Athanasius, Ephraim, Cyril of Jerusalem, Hilary of Poitiers or Gregory the Great to name of few of the early Fathers. Periodically we will provide biographical information and examples of the writing of these great men of faith. This page will focus on Origen.

Origen (185-253 A.D.) Thanks to the great Church historian, Eusebius, we know a great deal about Origen, whom Bishop Eusebius credited with having written 6000 books (titles).  He was born in Alexandria, Egypt about 185 A.D. in a Christian home. On the occasion of his father, St. Leonidas' martyrdom at the hands of Emperor Septimius Severus in 202 A.D., his life was saved by his mother who kept him from joining his father by hiding his clothes. Origen succeeded Clement as the head of the great Catechetical School at Alexandria, which taught the faith to catechumens. He traveled to Rome in 212 A.D., where he met St. Hippolytus, whose great treatise on The Apostolic Tradition was written in 215 A.D. By that time Origen, who was a layman, was nevertheless preaching in Caesarea, at the invitation of the Bishops of Caesarea and Jerusalem. These same Bishops ordained him to the priesthood in 230 A.D. The greatest scholar of Christian antiquity and the father of the homily, he wrote in excess of two thousand works and some estimates are as high as six thousand. He is considered a mystic and the father of the spiritual sense of Scripture. His mysticism was “closely dependent” upon Christian mystery.  Christian mystery is at the heart of Origen’s spiritual exegesis. One of his disciples alleged that he communicated, “the same divine power that inspired the prophets” and had a gift for explaining God to men.

At a time when heretics like Marcion rejected the Old Testament scriptures and Jews and false Gnostics were adversaries of the early Church, Origen used spiritual interpretation to defend the Old Testament.  De Lubac shows that this was not an improvisation, but that this type of interpretation was a “weapon of Christians” against unbelieving Jews and Christian Judaizers from the beginning. St. Paul set the example and Origen constantly referred back to his authority. For example, Paul maintained that the Law was spiritual, in that it contained “the shadow of goods to come” and that what happened to Israel was a figure for us and was recorded for our instruction.  Although the epistles of the Apostle contain only a limited number of examples (e.g., the “allegory” of Abraham and his wives in Gal. 4: 21-24) they highlight a method of spiritual understanding that requires us as Christians and disciples of St. Paul to endeavor to understand, “according to the spirit.”  Although this led Origen to venture “daring” opinions, in the third century when the Church’s dogma had not yet been spelled out by Church councils, he did so with considerable humility and a lack of dogmatism.  In sum, Origen is a “man of the Church” for whom “redemption through the blood of Jesus,” is taught throughout Scripture.

He was tortured and imprisoned during the Decian persecution, probably at Caesarea, and died as a result a few years later, about 253 or 254 A.D. Origen was the first to write a manual of dogmatic theology, entitled The Fundamental Doctrines. He wrote, "We maintain that that only is to be believed as the truth which in no way conflicts with the tradition of the Church and the Apostles" (De princ. I., praef 2). There is much to learn from Origen.

469
[4, 2, 4(al 4, 1, 11)] "Each man, then, ought to have the meaning of Sacred Scriptures inscribed in a three-fold manner upon his own soul. Thus, the simple man may be edified as if by the flesh of the Scriptures--for so we named the obvious sense. He that has ascended somewhat may be edified as if by the soul of the Scriptures. The perfect man, again . . . may be edified by the spiritual Law, which casts a shadow of the good things to come. For just as man consists of body, soul, and spirit, so also does Scripture, which is the gift of God's bounty for the salvation of men."

[Hom. 1] "The Church has four Gospels, but the heretics have many, including one represented as According to the Egyptians and another According to the Twelve Apostles. Even Basilides made bold to write a gospel, titled it with his own name . . . I know a certain gospel called According to Thomas and one According to Mathias. We have read many others too, rather than seem to be ignorant of them, because of those who think they know something when they are acquained with such things. But among all of these we approve none others except those, the four only Gospels, which are received by the Church."

[Hom. 5, 4] "Look at the great foundation of the Church, that most solid of rocks, upon whom Christ built the Church! And what does the Lord say to him? 'O you of little faith,' He says, 'why did you doubt!'"

[Hom. 13,3] "I wish to admonish you with examples from your religion. You are accustomed to take part in the divine mysteries, so you know how, when you have received the Body of the Lord, you reverently exercise every care lest a particle of it fall, and lest anything of the consecrated gift perish. You account yourselves guilty, and rightly do you so believe, if any of it be lost through negligence. But if you observe such caution in keeping His Body, and properly so, how is it that you think neglecting the word of God a lesser crime than neglecting His Body?"

[Hom. 12,4]  "I fear in fact that the divine books may be veiled for us, even sealed, because of the negligence and the hardness of our hearts ... It is not enough for us, therefore, to bring zeal to the study of the sacred Letters, but we must pray to the Lord and implore him day and night that the Lamb might come from the tribe of Judah who, taking this sealed book, might deign to open it. For it is he who, 'opening the Scriptures' sets the hearts of the disciples on fire so that they say: 'Did not our hearts burn within us when he opened to us the Scriptures."

[Hom. 7, 2] "Formerly there was Baptism, in an obscure way, in the cloud and in the sea[Old Testament images from the Exodus]; now, however, in full view, there is regeneration in water and in the Holy Spirit. Formerly, in an obscure way, there was manna for food; now, however, in full view, there is the true food, the Flesh of the Word of God, as He Himself says: 'My Flesh is truly food, and My Blood is truly drink." [John 6:56]

[Hom. 2,4] "First, there is that by which we are baptized unto the forgiveness of sins. A second forgiveness is found in the suffering of martyrdom. A third is that which given because of almsgiving . . . . In addition, to these there is also a seventh, albeit hard and laborious: the remission of sins through penance, when the sinner washes his pillow in tears, when his tears are day and night his nourishment, and when he does not shrink from declaring his sins to a priest of the Lord and from seeking medicine, after the manner of him who says, 'I said, To the Lord I will accuse myself of my iniquity', and you forgave the disloyalty of my heart.' [Psalm 31 (32): 5] In this way there is fulfilled that too, which the Apostle James says: 'If, then, there is anyone sick, let him call the presbyters of the Church, and let them impose hands upon him with oil in the name of the Lord; and the prayer of faith will save the sick man, and if he be in sins, they shall be forgiven him."

[Hom. 8, 3] "Every soul that is born into flesh is soiled by the filth of wickedness and sin . . . . And if it should seem necessary to do so, there may be added to the aforementioned considerations [quoting for example Job 14:4-5], the fact that in the Church, Baptism is given for the remission of sins; and according to the usage of the Church, Baptism is given even to infants. And indeed if there were nothing in infants that required remission of sins and nothing in them pertinent to forgiveness, the grace of Baptism would seem superflous."

[11, 14] "That which is sanctified through the word of God and prayer does not of its very nature sanctify him who avails himself of it. If this were the case, it would sanctify even him who eats unworthily of the Bread of the Lord, and no one would become infirm or weak on account of this food, nor would they fall asleep. Paul indicated something of this kind in the saying, 'This is why many among you are infirm and weak, and why many sleep"[1 Cor 11:30]. In regard to this Bread of the Lord, therefore, there is advantage to him who avails himself of it, when, with undefiled mind and pure conscience, he partakes of the Bread. Therefore, either by not eating, that is, by not eating the Bread which has been sanctified by the word of God and prayer [at Mass], do we suffer the loss of any good thing; nor by eating do we gain the advantage of any good thing."

"These things, indeed, are said of the typical and symbolic body; but much more might be said about the Word Himself, who became flesh and true food, of which he that eats shall live forever, no wicked person being able to eat it. For if it were possible for him who continues in wickedness to eat of him who became flesh, the Word and the living Bread, it would have been written that everyone who eats of this Bread shall live forever."