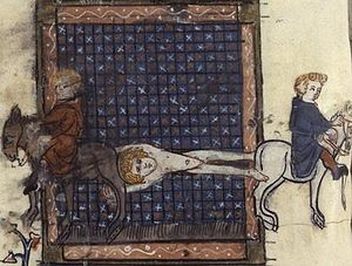 The Fathers of the Church spread the gospel of Jesus Christ, defended the Church in apologetic writing and fought the many heresies of the first six centuries of Christianity. These men, also called Apostolic Fathers, gave special witness to the faith, some dying the death of a martyr. Like Jesus who referred to Abraham as a spiritual father (Luke 16: 24) and St. Paul, who referred to himself in the same terms (1 Corinthians 4: 15), the Fathers were zealous for the word of God. Their writings are a testimony to the faith of the early Church, yet many Christians are unfamiliar with the work of Clement of Rome, Ignatius of Antioch, Polycarp of Smyrna, Justin the Martyr, Irenaeus, Tertullian, Origen, Cyprian of Carthage, Athanasius, Ephraim, Cyril of Jerusalem, Hilary of Poitiers or Gregory the Great to name of few of the early Fathers. Periodically we will provide biographical information and examples of the writing of these great men of faith. This page will focus on St. Hippolytus of Rome.

St. Hippolytus of Rome (about 170-236 A.D.)  Not much is known of his early life, but we do know that Hippolytus, a Greek, was a pupil of Irenaeus, who was a disciple of Polycarp, who was disciple of John the beloved disciple of Jesus. He became the head of a respected school of theology and a bishop in or around Rome. Subsequently he came into conflict with Pope Callistus (Calixtus), who was elected pope in 217 A.D. , but whom he considered heretical. He established himself as an anti-pope (i.e., one who claims to exercise the office of pope without the valid authority to do so) and remained in schism (though not a heretic) until the year 235 A.D. In this position he prepared a liturgical handbook, "Apostolike Paradosis" ["paradosis" is a Greek word meaning to "hand on the Word of God" which can also be translated as "tradition"], which contains the earliest evidence for the Roman Eucharistic prayer used in the Catholic Mass. His schism continued after the martyrdom of Pope Callistus in 222 A.D. Arrested and banished to mines on the island of Sardinia, Hippolytus urged his followers to return to communion with the legitimate pope, Antherus, before dying as a martyr about 236 A.D. Worth noting is his mention in his commentary on the Book of Daniel of the Savior as "born of the immaculate and virgin Mary." He was subsequently canonized as a saint.

[ 2]" Let the bishop be ordained after he has been chosen by all the people. When someone pleasing to all has been named, let the people assemble on the Lord's Day with the presbyters and with such bishops as may be present. All giving assent, the bishops shall impose hands on him , and the presbytery [priests] shall stand by in silence. Indeed, all shall remain silent, praying in their hearts for the descent of the Spirit.
Then one of the bishops present shall, at the request of all, impose his hand on the on who is being ordained bishop, and shall pray thus saying: [3] "God and Father of our Lord Jesus Christ, Father of mercies and God of all comfort, who dwell on high and attend to the lowly , who know all things before they come to pass: you that have given boundaries to your Church through your Word of grace, predestining from the beginning the just offspring of Abraham, making them princes and priests, so as not to leave your sanctuary without a ministry, from the beginning of the world, you have been well pleased to be glorified in those you have chosen. Pour forth now that power that comes from you, from your Royal Spirit, which you gave to your beloved Son Jesus Christ and which He bestowed upon His holy Apostles, who established in every place the Church of your sanctification for the glory and unceasing praise of your name. You know the hearts of all, grant this to your servant, whom you have chosen for the episcopate, to feed your holy flock and to serve without blame as your high priest, ministering night and day to propitiate unceasingly before your face; and to offer to you the gifts of your holy Church; and by the Spirit of the high-priesthood [of Christ] to have the authority to forgive sins (John 20: 22-23), in accord with your command; to assign lots [ordain to clerical life] in accord with the authority you gave to the Apostles . . ." [8]" When a presbyter is to be ordained, the bishop shall impose his hand upon his head, while the presbyters touch the one to be ordained. . .
[9] When a deacon is to be ordained he is chosen in the manner of those things said above, the bishop alone in like manner imposing his hands on him . . . "

[21]"Baptise first the children; and if they can speak for themselves, let them do so. Otherwise, let their parents or other relatives speak for them. . . . . When it is time for the Baptism the Bishop shall give thanks over the oil, which he puts into a vessel. This is called the oil of thanksgiving. Then he shall take other oil and exorcise it [expel evil or make holy]. . . . The presbyter [priest] then takes hold of each of those to be baptized and commands him to renounce, saying 'I renounce you Satan, and all your servants and all your works.' When he has renounced all these the presbyter shall anoint him with the oil of exorcism. . . . After all these things have been done, let him be given over to the bishop or presbyter who will baptize.
[23] And then the deacons immediately bring the oblation [offering of bread and wine] to the bishop; and he eucharists the bread [gives thanks over it] into the antitype [one that is foreshadowed by an earlier symbol, such as the gift of Himself at the Last Supper and on the Cross] of the Body of Christ, and the cup of mixed wine for an antitype of the Blood, which was shed for all who believe in Him; and milk and honey mixed together for the fulfillment of the promise made to the the fathers, which spoke of a land flowing with milk and honey, that is, the very flesh of Christ which He gave and those who believe are nourished like little children, since He makes sweet the bitter things of the heart by the gentleness of His word; and water also, for an offering signifying the washing, so that the inner part of man, which is of the soul may receive the same as the body."

[10, 34] "For Christ is the God over all, who has arranged to wash away sin from mankind, rendering the old man new. . . . If you obey his solemn injunctions and become a good imitator of Him who is good, you will become like Him and will be honored by Him. For God is no niggard; and He has made you a god for His own glory."