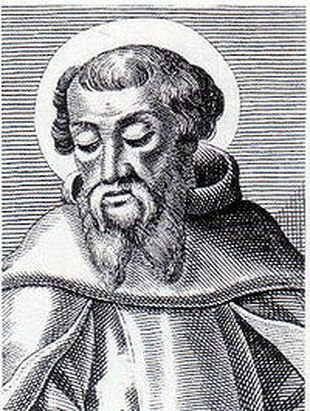 The Fathers of the Church spread the gospel of Jesus Christ, defended the Church in apologetic writing and fought the many heresies of the first six centuries of Christianity. These men, also called Apostolic Fathers, gave special witness to the faith, some dying the death of a martyr. Like Jesus who referred to Abraham as a spiritual father (Luke 16: 24) and St. Paul, who referred to himself in the same terms (1 Corinthians 4: 15), the Fathers were zealous for the word of God. Their writings are a testimony to the faith of the early Church, yet many Christians are unfamiliar with the work of Clement of Rome, Ignatius of Antioch, Polycarp of Smyrna, Justin the Martyr, Irenaeus, Tertullian, Origen, Cyprian of Carthage, Athanasius, Ephraim, Cyril of Jerusalem, Hilary of Poitiers or Gregory the Great to name of few of the early Fathers. Periodically we will provide biographical information and examples of the writing of these great men of faith. This page will focus on the great St. Irenaeus.

Biography: St. Irenaeus of Lyons (130-202 A.D.). Irenaeus was probably a native of Smyrna, in modern day Turkey. As a youth he testifies that he listened to the preaching of Bishop and Martyr Polycarp, who was himself a disciple of the Apostle John. He worked with Bishop Pothinus in Lyons as a presbyter and after the martyrdom of Bishop Pothinus in 177 or 178 A.D. in a persecution of the Emperor Aurelius. Irenaeus was saved by being on a mission for the Bishop to Rome.  Upon his return he was appointed successor, becoming the second Bishop of Lyons, France. He soon became immersed in his work of combating the numerous heresies that threatened to destroy the unity of the Church, for which Jesus had prayed (John 17:20-21) and which St. Paul described as the "household of God, the pillar and bulwark of the truth" (1 Timothy 3: 15). He took seriously the warning of St. Peter in Acts 20: 28-30, "Take heed to yourselves and to all the flock, in which the Holy Spirit has made you overseers, to care for the church of God which he obtained with the blood of his own Son. I know that after my departure fierce wolves will come in among you, not sparing the flock; and from among your own selves will arise men speaking perverse things, to draw away the disciples after them. " He was the most important of the second century defenders of the faith and is best known for his great work "Detection and Overthrow of Gnosis Falsely So-Called," but generally referred to as "Adversus Haereses" or "Against Heresies." The Gnostics he battled against believed that matter was as source of evil and could not have been created by a good God. They claimed special knowledge beyond that of the faith of the Church. Some were ascetics and some were libertine. The epistle of Jude warns against a Gnostic group that was turning the agape love feast into orgies.

[1, 10, 2] . . . the Church, having received this preaching and this faith ["from the apostles and from their disciples"] although she is disseminated throughout the whole world, yet guarded it as if she occupied but one house. She likewise believes these things as if she had but one soul and one and the same heart; and harmoniously she proclaims them and teaches them and hands them down, as if she possessed but one mouth. For, while the languages of the world are diverse, nonetheless, the authority of the traditions is one and the same."
(See also 2 Thessalonians 2:15)

[3, 1, 1] We have learned the plan of our salvation from none other than those through whom the gospel came down to us. Indeed, they first preached the gospel , and afterwards, by the will of God, they handed it down to us in the Scriptures . . . Matthew also issued among the Hebrews a written Gospel in their own language, while Peter and Paul were evangelizing in Rome and laying the foundation of the Church. After their departure, Mark, the disciple and interpreter of Peter, also handed down to us in writing what had been preached by Peter. Luke also, the companion of Paul, set down in a book the Gospel preached by him. Afterwards, John, the disciple of the Lord who reclined at His bosom also published a Gospel, while he was residing at Ephesus in Asia.

[3, 3, 1] It is possible, then, for everyone in in every Church, who may wish to know the truth, to contemplate the tradition of the Apostles which has been made known throughout the whole world. And we are in a position to enumerate those who were instituted bishops by the Apostles, and their successors to our own times: men who neither knew nor taught anything like these heretics rave about.

[3, 3, 3] The blessed Apostles [Peter and Paul] having founded and built up the Church [of Rome] handed over the episcopate to Linus [our 2d pope]. Paul makes mention of this Linus in the epistle to Timothy [2 Tim 4:21] To him succeeded Anencletus; and after him in the third place, from the Apostles, Clement. . ." [Peter, Linus, Anencletus, and Clement were the first four Bishops of Rome or "Popes." "Pope" is an Italian word meaning "father"]

[3, 22, 4] . . . Mary the Virgin is found to be obedient, saying: "Behold, O Lord, your handmaid; be it done to me according to your word" [Luke 1:38] Eve, however, was disobedient. . . . Thus, the knot of Eve's disobedience was loosed by the obedience of Mary. What the virgin Eve bound in unbelief, the Virgin Mary loosed through faith.

He taught the new sacrifice of the new covenant [the Mass] of which Malchias, one of the twelve [Old Testament] prophets, had signified before hand: "You do not My will" says the Lord Almighty, and I will not accept a sacrifice at your hands. For from the rising of the sun to its setting My name is glorified among the gentiles, and in every place incense is offered to My name, and a pure sacrifice; for great is My name among the gentiles, says the Lord . . . By these words He makes it plain that the former people will cease to make offering to God; but that in every place sacrifice will be offered to Him, and, indeed, a pure one. . .

[Bk 5, 2, 2] Vain in every respect are they who reject the entire dispensation of God, and deny the salvation of the flesh, and spurn its regeneration. . .But if this flesh is not saved, then neither did the Lord redeem us by his blood, nor is the cup of the Eucharist the Communion of his Blood, or the bread that we break the Communion of his Body...

3.When therefore, the cup that has been mixed [with water] and the bread that has been made receive the Word of God and become the Eucharist and the Body of Christ, from which the substance of our flesh is increased and supported, how can they affirm that the flesh is incapable of receiving the gift of God, which is eternal, which flesh is nourished from the Body and Blood of the Lord and is a member of him?

In Demonstration of the Apostolic Preaching he teaches us typology (seeing Jesus in the Old Testament Scriptures). Ponder this:

Because in the original formation of Adam, all of us were tied and bound up with death through disobedience, it was right that through the obedience of him who made man for us we should be released from death; and because death reigned over the flesh, it was right that through the flesh and lose its force and let man go free from his oppression . . . And therefore our Lord took a body like that of our first parent, and conquered by Adam that which by Adam had stricken us down. Whence is the substance of the first formed man? From the Will and Wisdom of God, and from the virgin earth. So the Lord summing up afresh this man, took the same dispensation of entry into flesh, being born from the Virgin by the Will and the Wisdom of God . . . And just as, through a disobedient virgin [Eve] man was stricken down and fell into death, so through the Virgin who was obedient to the word of God [Mary] was man reanimated and received life.  It was right that Eve should be summed up in Mary, that a Virgin should be a virgin's intercessor, and by a Virgin's obedience undo and put away the disobedience of a virgin . . . and the trespass that came by the tree was undone by the tree of obedience, when hearkening unto God, the Son of Man was nailed to a tree . . . . And seeing that he is the Word of God Almighty, whose invisible presence shed in us and over the entire world, he still continues his influence in the world, in all its length, height and depth. (Bk. III, 31-33).