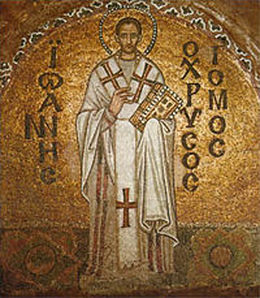 He was born in Antioch, Syria sometime between 344-354, the date being uncertain despite the large number of biographical sketches of his life. Tutored by his mother at an early age, he went on to formally study philosophy and rhetoric. He was baptized at the age of 18 years by Bishop Meletius of Antioch and was ordained a lector three years later after studying theology under Diodore of Tarsus. He spent years as a hermit (monk) outside of Antioch living under the most primitive conditions of deprivation for the sake of the Kingdom (surviving on bread and water) because of the immorality of the cities, but had to return to society due to severe problems with his gastro-intestinal and kidney functions. He was ordained a deacon in 381 A.D. and by 386 A.D. he was ordained a priest. Serving in the main church in Antioch for the next twelve years, his preaching earned him the title, "golden mouth." He reluctantly accepted the bishopric of Constantinople in 398 A.D., after being summoned to the city by the emperor.

St. John Serves as Metropolitan Bishop of Constantinople, Capital of the Eastern Roman Empire. As the Metropolitan he quickly initiated a reform of the clergy and laity that made his life difficult in the worldly capital of the empire.. He emptied the episcopal palace of expensive plate and furniture and built a great hospital for the poor and the suffering his first year. He refused to attend banquets, gave no dinner parties and was benevolent with the poor. He extended his ministry to the growing numbers of Goths in Constantinople, having a part of the Bible translated into their language. He despatched missionaries to Gothic and Scythian tribes on the Danube. He prohibited applause in Church to increase the solemnity of the liturgy. He normally preferred to give bold sermons on morality. His preaching against the luxury and depravity of the court of Emperor Arcadius earned him the enmity of empress Eudoxia.

In 401 at the request of the clergy in Ephesus, he visited the city, where he appointed a new archbishop and deposed six bishops convicted of simony (selling of ecclesiastical pardons, offices or emoluments). John also had a confrontation with the bishop who had presided over his ordination to the bishopric of Constantinople, namely Theophilus of Antioch. The latter, charged by desert monks with persecution of them, had been called to Constantinople by John in 402 A.D. to answer the charges. Subsequently, Theophilus, called together a synod of 36 bishops (mostly from Egypt) who condemned John on 29 charges (including the false charge of treason) and declared him deposed after he refused to appear before them.

St. John Exiled Unjustly for His Moral Courage in Denouncing the Empress

Emperor Arcadius then exiled John to Bithynia, but such was the uproar among the citizens and the fear created by a timely earthquake that the Emperor recalled John after only one day of exile. But the great cleric soon revived the enmity of the Empress when he criticized the reveling that went on near the Cathedral after the erection of a silver statute of the Empress nearby. The Emperor ordered him to retire, but when he refused the Emperor forbade him the use of the city's churches. An outdoor baptismal ceremony at the baths of Constans led to bloodshed when the Emperor's troops broke it up and on June 9, 404 A.D. John was forced to seek exile in Cucusus on the eastern frontier of Armenia..

St. John Defended by Pope Innocent I to No Avail

Emperor Honorius and Pope Innocent I tried to summon a new synod on John’s behalf, but the papal legates were imprisoned and sent back to Rome. Innocent broke off communion with both the Patriarchs of Constantinople and Antioch until after John’s death, when his name was restored to the diptychs (i.e., bound manuscript apparently with names of bishops). John's notoriety and accomplishments continued there so his enemies went to the feeble-minded Emperor and persuaded him to banish John to Pityus (Pontus) on the eastern shores of the Black Sea in the Caucasus, but he died en route on September 14, 407 A.D. His last words were "Glory be to God for all things."

St. John may have been dead, but he was not forgotten. St. Proclus, Patriarch of Constantinople preached a sermon glorifying the Saint and the people were so moved that before he finished the sermon he was being urged by the crowd to ask the emperor to have his relics returned to the city. The Emperor Theodosius II, son of Eudoxia, approved and when those sent to get them could not, the emperor immediately send a message begging forgiveness of St. John on behalf of the former emperor and his mother. When St. John’s reliquary coffin was brought to the Church of the martyr, St. Irene in 438 A.D., it was opened and his body was found to be incorrupt. Theodosius was said to have approached the coffin with tears and the people remained all night. Then it was transferred to the Church of Holy Martyrs, where the people were said to have cried out, "Receive back thy throne father!" and the Patriarch and clergy saw St. John open his lips and respond, "Peace be to all."

St. John’s Orations Against the Judaizers has been mistranslated by some to be "Against the Jews" and much of has been made of his strong invective including his use of the word "hate." But in other sermons John is admiring of the "religious devotion and stamina" of the local Jewish community. What he hated were Judaizers attending both synagogue and Mass and persuading others to do the same. But scholars like Robert Louis Wilken in his book, John Chrysostom and the Jews: Rhetoric and Reality in the Late Fourth Century (1983) demonstrate that John was no anti-Semite. His written and oral teaching below emphasize the priesthood's role in the sacrifice of Christ and the real presence of Christ in the Eucharistic Communion.

1118 [3, 4, 177] "When you see the Lord immolated and lying upon the altar, and the priest bent over that sacrifice praying, and all the people empurpled [made purple in coloring] by that precious blood, can you think that you are still among men and on earth? Or are you lifted up to heaven?"

1119 [3, 5, 182] "They who inhabit the earth, they who make their abode among me, are entrusted with the dispensation of the things of heaven! Priests have received a power which God has given neither to angels nor to archangels. It was said to them: 'Whatsoever you shall bind upon earth shall be bound in heaven; and whatsoever you shall loose, shall be loosed' [Mt 18: 18]. Temporal rulers have indeed the power of binding; but they can bind only the body. Priests, however, can bind with a bond which pertains to the soul itself; and transcends the very heavens. Whatever the priests do here on earth, God will confirm in heaven, just as the master ratifies the decisions of his servants. [184] Did He not give them all the powers of heaven? 'Whose sins you shall forgive,' He says, 'they are forgiven them: whose sins you shall retained.' [John 20: 23] What greater power is there than this? The Father has given all the judgment to the Son [John 5:22]. And now I see the Son placing all this power in the hands of men. They are raised to this dignity as if they were already gathered up to heaven, elevated above human nature, and freed of its limitations."

CLICK HERE for Writings of the Golden Mouth, Doctor of the Church