The Doctrine of Purgatory 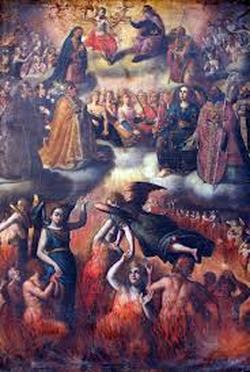 Why is the doctrine of Purgatory difficult for non-Catholics to understand?  It is clear in the Old Testament that the Jews had a tradition of praying for the dead.  We see in the Second Book of Maccabees the following passage by Judas, commander of the forces of Israel:

43 “He also took up a collection, man by man, to the amount of two thousand drachmas of silver, and sent it to Jerusalem to provide for a sin offering. In doing this he acted very well and honorably, taking account of the resurrection.44 For if he were not expecting that those who had fallen would rise again, it would have been superfluous and foolish to pray for the dead. 45 But if he was looking to the splendid reward that is laid up for those who fall asleep in godliness, it was a holy and pious thought. Therefore he made atonement for the dead, that they might be delivered from their sin.” (2 Maccabees 12: 43-45)

Even today Jews pray the Mourner’s Kaddish, for 11 months after the death of a loved one. It is of no value to argue that Protestant reformers took these books (i.e., 1-2 Maccabees, Judith, Baruch, Tobias, Wisdom and Sirach) out of the Old Testament because they had no authority to do so and their only precedent was that the Jews themselves removed them in the decades after the destruction of Jerusalem when their holy books were burned (by the Romans) and they were unsure of their own canon. This was allegedly because they could not find Hebrew manuscripts for them (though fragments of these books in Hebrew were found for six of the seven removed by the Protestants from the canon in the Dead Sea Scrolls in 1949).

Where in Scripture does it say that the canon of the Sacred Books must be defined by the Pharisees who rejected Jesus as Lord and Savior?  Moreover, Luther and other reformers (except Calvin) included these books in published Bibles as useful for devotion, even if labeling them “apocryphal.”  So, there is no basis for removing wisdom literature from the Old Testament!

Historically, the Church Jesus founded was the Catholic Church. As Luther himself acknowledged in his commentary on John, “We are obliged to yield many things to the Papists--that with them is the Word of God, which we received from them; otherwise we should have known nothing at all about it." The Church defined the canon of the Scriptures and she did so with the authority of Christ who assured Peter:  “you are Peter, and on this rock I will build my church, and the powers of death shall not prevail against it. 19 I will give you the keys of the kingdom of heaven, and whatever you bind on earth shall be bound in heaven, and whatever you loose on earth shall be loosed in heaven” (Matthew 16:18-19).

Was such an assurance given to any of the Reformers?  After all, they did not agree with one another universally on anything except that they disagreed with the Catholic Church, of which they themselves were members until they broke away.  If they were inspired by God, why couldn't they agree with one another? Why would God (the Holy Spirit) allow his Church to be in error for almost 1500 years? Didn't Christ promise, "And I tell you, you are Peter, and on this rock I will build my church, and the powers of death shall not prevail against it"?

There are a number of New Testament passages which imply the doctrine of Purgatory.  Jesus says we must be perfect: “You, therefore, must be perfect, as your heavenly Father is perfect.” The implication here is that we cannot enter into heaven if we are not perfect.  Revelation 21:27 echoes this indicating, that “nothing unclean shall enter it,” that is, heaven. Only mortal sin (1 John 5:16-17) which has not been forgiven keeps us out of heaven, but even venal sins must be atoned for since nothing impure can enter heaven.

Jesus himself indicates that this is the case in Matthew 12:32 when he says, “And whoever says a word against the Son of man will be forgiven; but whoever speaks against the Holy Spirit will not be forgiven, either in this age or in the age to come.”  Jesus is referring here to sins against the Holy Spirit (i.e., the sin of final impenitence). But the implication here is that some sins can be forgiven in the world to come. In Hell there is no escape and you cannot enter Heaven in the first place unless you have repented of your sins and have been perfectly purified.  This indicates there must be a place where venal sins can be atoned for if this was not done in our lifetime. As St. Augustine observed:

As the Catholic encyclopedia notes:  "The same interpretation is given by Gregory the Great (Dial., IV, xxxix); St. Bede (commentary on this text); St. Bernard of Clairvaux (Sermon lxvi in Canticle. n. 11) and other eminent theological writers."

St. Paul indicates that, when we are judged, each man’s work will be tried. And what happens if a righteous man’s work fails the test? "He will suffer loss, though he himself will be saved, but only as through fire" (1 Corinthians 3:15). But this loss can’t refer to being sent to hell, since no one is saved there; and it cannot mean heaven, since there is no suffering or "fire" there. Rather, the Catholic doctrine of purgatory explains this passage.

Augustine testifies to Church Fathers belief in this doctrine in one of his famous sermons:

But by the prayers of the holy Church, and by the salvific [i.e., saving] sacrifice, and by the alms which are given for their spirits, there is no doubt that the dead are aided, that the Lord might deal more mercifully with them than their sins would deserve. The whole Church observes this practice which was handed down by the Fathers: that it prays for those who have died in the communion of the Body and Blood of Christ, when they are commemorated in their own place in the sacrifice itself [the Holy Mass]; and the sacrifice is offered also in memory of them, on their behalf. If, then, works of mercy are celebrated for the sake of those who are being remembered, who would hesitate to recommend them, on whose behalf prayers to God are not offered in vain? It is not at all to be doubted that such prayers are of profit to the dead; but for such of them as lived before their death in a way that makes it possible for these things to be useful to them after death (ibid., 172:2).

Purgatory has been a part of Catholic doctrine since the time of Christ.  If it did not exist, God would have to consign even venal sinners to hell, since nothing impure can enter heaven. Purgatory is not a second chance for conversion, but rather a purification for the soul of the person already justified, but in need of purification. It represents the mercy of God. The Catechism of the Catholic Church notes, “From the beginning the Church has honored the memory of the dead and offered prayers in suffrage for them, above all the Eucharistic sacrifice [the Mass], so that, thus purified, they may obtain the beatific vision of God” (CCC 1032).  It is not so much a place as a state of being, in which, "All who die in God's grace and friendship, but still imperfectly purified, are indeed assured of their eternal salvation."

For more on Purgatory, see these websites:


Or if you prefer a reasoned argument based upon Sacred Scripture in book form, I suggest you order, The Biblical Basis of Purgatory by John Salza published by St. Benedict Press, LLC.