Prayer to St. Michael the Archangel
written by Pope Leo XIII in 1884 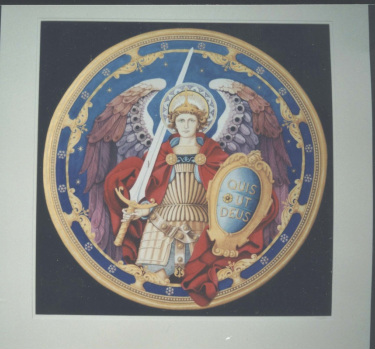 St. Michael the Archangel,
defend us in the day of Battle;
Be our safeguard against the wickedness and snares of the Devil.
May God rebuke him, we humbly pray,
and do Thou, O Prince of the Heavenly Host,
by the power of God, cast into Hell,
Satan and all the other evil spirits,
who prowl through the world,
seeking the ruin of souls. Amen.
This is the shorter version of the prayer composed by Pope Leo XIII after saying Mass one day in the Vatican chapel attended by some Cardinals and others on the Vatican staff, following a dramatic incident.  He was in leaving the altar when he suddenly collapsed to the floor and awoke saying "Oh, what a horrible picture I was permitted to see."  He had witnessed a struggle between Satan and the Church, in which Satan bragged he could destroy her.  But he had been relieved to see that Satan would not triumph because St. Michael would be there to consign him to the abyss of hell.  Not long after this experience he composed this prayer which used to be said after every low Mass through the Catholic world.  We join the voices of those urging that in the present crisis' of this world, from the horrors of large scale abortion to the brink of nuclear war and unbridled terrorism, that this prayer be reintroduced.

St. Michael is mentioned in Scripture in the Book of Daniel as "one of the chief princes" who came to help the great prophet Daniel against the king of Persia.  In Daniel 12 we are told that Michael, "the great prince" who has charge of God's people will be involved in the final confrontation at the end of time as well.  Tradition associated the great archangel with guarding the tree of life in the Garden of Eden, administering the plagues against the pharaoh of Egypt and speaking for God in the burning bush (according to St. Gregory of Nazianzen).

In the New Testament, St. Michael is again contending with Satan in the Letter of Jude, where it says, "But when the archangel Michael, contending with the devil, disputed about the body of Moses, he did not presume to pronounce a reviling judgment upon him, but said, "The Lord rebuke you" (Jude 9).  But the most famous scene for Michael is his battle with Satan that led to the latter's expulsion from Heaven.  We read in Revelation 12:

And a great portent appeared in heaven, a woman clothed with the sun, with the moon under her feet, and on her head a crown of twelve stars; she was with child and she cried out in her pangs of birth, in anguish for delivery.  And another portent appeared in heaven; behold, a great red dragon, with seven heads and ten horns, and seven diadems upon his heads. 4 His tail swept down a third of the stars of heaven, and cast them to the earth. And the dragon stood before the woman who was about to bear a child, that he might devour her child when she brought it forth; she brought forth a male child, one who is to rule all the nations with a rod of iron, but her child was caught up to God and to his throne, and the woman fled into the wilderness, where she has a place prepared by God, in which to be nourished for one thousand two hundred and sixty days.

Now war arose in heaven, Michael and his angels fighting against the dragon; and the dragon and his angels fought, but they were defeated and there was no longer any place for them in heaven. And the great dragon was thrown down, that ancient serpent, who is called the Devil and Satan, the deceiver of the whole world—he was thrown down to the earth, and his angels were thrown down with him. And I heard a loud voice in heaven, saying, "Now the salvation and the power and the kingdom of our God and the authority of his Christ have come, for the accuser of our brethren has been thrown down, who accuses them day and night before our God. And they have conquered him by the blood of the Lamb and by the word of their testimony, for they loved not their lives even unto death. Rejoice then, O heaven and you that dwell therein! But woe to you, O earth and sea, for the devil has come down to you in great wrath, because he knows that his time is short!" (Rev 12: 1-12).

In 1994 in a speech in St. Peter's square, Pope John Paul II said, "May prayer strengthen us for the spiritual battle we are told about in the Letter to the Ephesians: "Draw strength from the Lord and from His mighty power" (Ephesians 6:10). The Book of Revelation refers to this same battle, recalling before our eyes the image of St. Michael the Archangel (Revelation 12:7). Pope Leo XIII certainly had a very vivid recollection of this scene when, at the end of the last century, he introduced a special prayer to St. Michael throughout the Church. Although this prayer is no longer recited at the end of Mass, I ask everyone not to forget it and to recite it to obtain help in the battle against forces of darkness and against the spirit of this world."