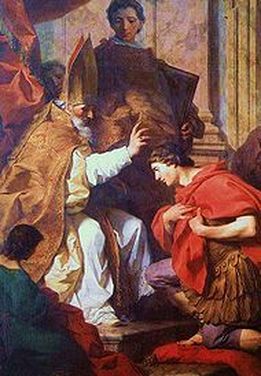 The Fathers of the Church spread the gospel of Jesus Christ, defended the Church in apologetic writing and fought the many heresies of the first six centuries of Christianity. These men, also called Apostolic Fathers, gave special witness to the faith, some dying the death of a martyr. Like Jesus who referred to Abraham as a spiritual father (Luke 16: 24) and St. Paul, who referred to himself in the same terms (1 Corinthians 4: 15), the Fathers were zealous for the word of God. Their writings are a testimony to the faith of the early Church, yet many Christians are unfamiliar with the work of Clement of Rome, Ignatius of Antioch, Polycarp of Smyrna, Justin the Martyr, Irenaeus, Tertullian, Origen, Cyprian of Carthage, Athanasius, Ephraim, Cyril of Jerusalem, Hilary of Poitiers or Gregory the Great to name of few of the early Fathers. Periodically we will provide biographical information and examples of the writing of these great men of faith. This page will focus on the great Ambrose of Milan.

St. Ambrose of Milan (about 333-397 A.D.). He was born in Treves, Gaul, the son of the Praetorian Prefect of the region somewhere between 333 and 339 A.D. After his father's death at an early age, he grew up in Rome with his mother, his sister (a consecrated virgin and nun) and brother. He was trained in rhetoric and law and served as Consul of the province of Liguria-Emilia, residing in Milan by 370 A.D. When the Arian bishop of Milan died [Arians were a heretical sect that denied the divinity of Christ] in 374 A.D., Ambrose, who was only a catechumen [people being given instruction in the faith prior to entering it] went to the scene to calm the crowds and was the chosen by both factions, Arian and Catholic, to be the next consecrated bishop, one week after his baptism [formal entry into the Body of Christ]. He refused at first but the emperor insisted. His first step was to divest himself of his "sizeable family patrimony," donating his silver and gold to the care of the poor and the Church. His life was dedicated to prayer, study and ascetical living. His moral and ascetical writings mark this Catholic bishop as "perhaps the most brilliant mind of his time." St. Augustine called him "a faithful teacher of the Church, and even at the risk of his life a most strenuous defender of Catholic truth, whose skill, constancy, labors, and perils, both on account of what he did and what he wrote, the Roman world unhesitatingly proclaims." St. Jerome said he was "a pillar of the Church." His works De Fide (On the Faith) and De Spiritu Sancto (On the Holy Spirit) are among the best of ancient works in their treatment of the mystery of the Holy Trinity.

It is worth noting that Arian bishops believed the God enthroned ruler was superior to the Christ enthroned bishops (Luther too believed that the authority of the prince superceded that of the bishop), since they denied the divinity of Christ. But Ambrose said "The emperor is in the Church not above it." This pastor of the flock in Milan is remembered especially for successfully urging the emperor Gratian in banning Arianism in the West, for repeatedly opposing the restoration of the statue of the goddess of victory in the Senate chamber and for pressuring the Emperor Theodosius to make public penance after his troops massacred 7000 people in a revolt in Thessalonica in 390 A.D. He also played a role in the formation of St. Augustine, baptizing him in.  Ambrose was said to never tire in his recommendation of virginity for service to God, so much so that some young mothers forbade their daughters to attend his sermons. He died on Good Friday 397 after having received the Body and Blood of His Lord in Holy Communion, also known as the Eucharist, from a fellow bishop. Upon his death there was a great outpouring of conversions so that five bishops were not enough to baptize all those who came into the Church. He is among the elite declared a "doctor of the Church" because of his writings, some of which are quoted below.

[2, 16] "Each of our merits will hang in the balance, and it is often inclined to this side or that by the superior weight either of our good works or of our degenerate crimes. If evil deeds turn the scale, alas for me! But if good, then pardon is at hand. No one is free of sin; but where good works prevail, sins are lightened, overshadowed, and covered up. On the day of judgment either our works will assist us or they will plunge us into an abyss, as if dragged down by a millstone."

Letter of Ambrose, Sabinus, Bassian and other [Bishops meeting in synod] to Pope Siricius [389 A.D.]

[42, 1] " We recognize in the letter of your holiness the vigilance of the good shepherd. You faithfully watch over the gate entrusted to you, and with pious solicitude you guard Christ's sheepfold [John 10:17], you that are worthy to have the Lord's sheep hear and follow you. Since you know the sheep of Christ you will easily catch the wolves and confront them like a wary shepherd, lest they disperse the Lord's flock by their constant faith and their bestial howling."

[42, 3] "They pretend to honor marriage; but what praise can be given marriage if there is no glory in virginity? Neither do we deny that marriage has been sanctified by Christ, since the divine word says: 'The two shall become one flesh [Mt 19: 5] and one spirit. But we are born before we are brought to our goal, and the mystery of the divine operation is much more excellent that the remedy for human weakness. It is quite right that a good wife be praised, but even better that a pious virgin be preferred."

[38, 25] "We saw the Prince of Priests coming to us, we saw and heard Him offering His blood for us. We follow, inasmuch as we are able, being priests; and we offer the sacrifice on behalf of our people. And even if we are of but little merit, still, in the sacrifice, we are honorable. For even if Christ is not now seen as the one who offers the sacrifice, nevertheless it is He Himself that is offered in sacrifice here on earth when the Body of Christ [the Eucharist] is offered. Indeed, to offer Himself He is made visible in us, He whose word makes holy the sacrifice that is offered [on the altar at Mass]."

[4, 10, 124] "'My flesh is truly food and My blood is truly drink [Jn 6: 56].' You hear Him speak of His flesh, you hear Him speak of His blood, you know the sacred signs [sacramenta] of the Lord's death; and do you worry about His divinity? Hear His words when He says: 'A spirit has not flesh and bones [Lk 24:39].' As often as we receive the sacramental elements which through the mystery of the sacred prayer are transformed [transfigurantur] into the flesh and the blood of the Lord, we proclaim the death of the Lord [1 Cor 11: 26].

[1, 6, 77] "If there is any grace in the water [of baptism], it is not from the nature of water but from the presence of the Holy Spirit . . . [79] We are sealed therefore, with the Spirit by God. For just as we die in Christ in order to be born again, so too we are sealed with the Spirit so that we may be able to possess His splendor and image and grace, which is indeed our spiritual seal. For although it is in our body that we are visibly sealed, it is truly in our heart that we are sealed, so that the Holy Spirit may imprint upon us the likeness of His heavenly image."

Penance [written to refute the heresy of Novatian, who denied the Church had the power to forgive grave sins, about 387-390 A.D.]

[1, 8, 36] "Why, then do you impose hands and believe it to be the effect of the blessing if perchance some sick person recovers? Why do you presume that any can be cleansed by you from the filth of the devil? Why do you baptize, if it is not allowed that sins be forgiven through men? In baptism too there is forgiveness of all sins [1 Pet 3: 21; Rom 6: 3-5, 8; Col 2: 12; John 3: 5]; what is the difference whether priests claim this power is given them to be exercised in Penance or at the font [in baptism]? The mystery is the same in both."

[2, 13, 19] "It is most evident from the preaching of the Lord that we have been commanded to restore the grace of the heavenly Sacrament to those guilty even of the most grave crime, if, with their whole heart and by an open confession of their sin, they do penance. It is certain, therefore, that you have no excuse for remaining in your sins."

On the Mysteries
[9, 50] Perhaps you may be saying: I see something else; how can you assure me that I am receiving the Body of Christ? It but remains us for us to prove it. And how many are the examples we might use! Let us prove that this is not what nature has shaped it to be, but what the blessing has consecrated; for the power of the blessing is greater than that of nature, because by the blessing even nature itself is changed.

[9, 58] Christ is in that sacrament, because it is the Body of Christ; yet, it is not on that account corporeal food, but spiritual. Whence also his apostle says of the type: 'For our fathers ate spiritual food and drank spiritual drink,' For the Body of God is a spiritual body.[1 Cor 10: 2-4].

To be Continued. Ambrose is too rich to taste on only one web page.