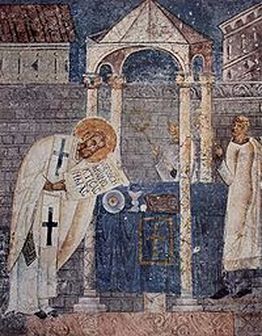 The Fathers of the Church spread the gospel of Jesus Christ, defended the Church in apologetic writing and fought the many heresies of the first six centuries of Christianity. These men, also called Apostolic Fathers, gave special witness to the faith, some dying the death of a martyr. Like Jesus who referred to Abraham as a spiritual father (Luke 16: 24) and St. Paul, who referred to himself in the same terms (1 Corinthians 4: 15), the Fathers were zealous for the word of God. Their writings are a testimony to the faith of the early Church, yet many Christians are unfamiliar with the work of Clement of Rome, Ignatius of Antioch, Polycarp of Smyrna, Justin the Martyr, Irenaeus, Tertullian, Origen, Cyprian of Carthage, Athanasius, Ephraim, Cyril of Jerusalem, Hilary of Poitiers or Gregory the Great to name of few of the early Fathers. Periodically we will provide biographical information and examples of the writing of these great men of faith. This page will focus on St. Basil the Great.

St. Basil the Great (330-379)  Born into a pious family at Caesarea in Cappadocia about 330 A.D., his father was the son of St. Macrina the Elder and his mother Emmelia was the daughter of a martyr. He was one of ten children, three of whom became bishops, including Basil. Along with his brother, Gregory, Bishop of Nyssa and his soulmate from his days of study in Athens, St. Gregory of Nazianz, these three are known as the "Three Cappadocians," great defenders of the faith and most especially the doctrine of the Trinity. Basil was converted to the religious life by his sister, St. Macrina the Younger, and traveled throughout the Egypt and the Middle East in search of the religious vocation he should choose. After succeeding Bishop Eusebius (the great Church historian), becoming Bishop of Caesarea in 370 A. D., Basil joined the fight against Arianism (which challenged the divinity of Christ) and Pneumatomachianism (which strenuously opposed the divinity of the Holy Spirit), early Trinitarian heresies. During the reign of Emperor Valens, he was one of a handful of orthodox bishops to retain their sees [bishopric], thanks to his forceful character and his innate sense of when to stand up to the Emperor and when to ignore him. Arianism was far more pervasive and destructive than anything ever to challenge the Church, including the Reformation. If numbers were the measure of the Catholic Church, that Church would not have stood with Basil, Hilary, Athanasius, Liberius and Ossius, but would have gone over to the views of the far more numerous Arian bishops and the Emperor. Basil is also the founder of Eastern monasticism and because of his written testimonies in defense of the faith, such as On the Holy Ghost and Against Eunomius, he has been declared not only a saint, but a doctor of the Church. It is Basil who is credited with insisting on the formula, now universally accepted, of one being or essence in God [hypostasis] with three persons [hypostases]. His work on the Holy Spirit was criticised because he never specifically says that the Holy Spirit is God, but this is implicit throughout the thesis! St. Athanasius described this tactic, doubtless a conscious one, of "becoming weak with the weak to gain the weak."

Letter to His Brother Gregory of Nyssa [about 369 A.D.]

915
[38, 4] "It is quite impossible to conceive of any sort of separation or division by which the Son could be thought of apart from the Father, or the Spirit be disjoined from the Son; rather the communion and the distinction apprehended in Them, are, in a certain sense, inexpressible and unimaginable, since the continuity of their nature is never broken by the distinction of Persons, nor are their notes of proper distinction ever confessed in Their community of essence."

916
[93] "To communicate each day and to partake of the holy Body and Blood of Christ is good and beneficial; for He says quite plainly: 'He that eats My Flesh and drinks My Blood has eternal life' [John 6:55] Who can doubt that to share continually in life is the same thing as having life abundantly? We ourselves communicate [receive the Eucharist at Mass] four times each week, on Sunday, Wednesday, Friday and Saturday; and on other days if there is a commemoration of any saint. It were needless to point out that for anyone in times of persecution to be obliged, in the absence of a priest or deacon, to receive communion by his own hand is certainly not a serious offence, because long custom sanctions this practice in such cases. Indeed, all the solitaries in the desert [hermits], where there is no priest, reserving Communion at home, receive it from their own hands. In Alexandria and in Egypt, everyone, even the laity, reserves Communion in his own home and receives by his own hand whenever he is pleased to do so." [the assumption is that they have brought to their homes the consecrated hosts, formerly bread, when there was no other means to receive Communion]

Of Basil to Amphilochius, Bishop of Iconium: The First Canonical Letter [374 A.D.]


919a [188, 2] "A woman who deliberately destroyed a fetus must pay the penalty for murder."
919f [188, 8] "Those also who give drugs causing abortions are murders themselves, as well as those who receive the poison which kills the fetus."

940
[3,1] "To each who receive the Spirit it is as if he alone received Him; yet the grace the Spirit pours out is sufficient for the whole of mankind. All who share in Him share not according to the measure of His power but according to the capacity of their own nature. . . Shining upon those who are cleasened of every blemish, He renders them spiritual in a communion with Himself. Just as a sunbeam, falling on light and transparent bodies, makes them exceedingly bright and causes them to pour forth a brilliance from themselves, so to souls which bear the Spirit and which are illuminated by the Spirit become spiritual themselves and send forth grace to others. Hence comes to us foreknowledge of the future, understanding the mysteries, discernment of what is hidden, sharing of good gifts, heavenly citizenship, a place in the choir of angels, joy without cease, abiding in God, likeness unto God, and that which is best of all, being made God."

947 [15, 35] "This then is what is meant to be born again of water and Spirit: [John 3:5] just as our dying is effected in the water, our living is wrought through the Spirit. In three immersions and in an equal number of invocations the great mystery of baptism is completed in such a way that the type of death may be shown figuratively, and that by the handing on of divine knowledge the souls of the baptized may be illuminated. If, therefore, there is any grace in the water, it is not from the nature of water but from the Spirit's presence there."

954 [27, 66] "Of the dogmas and kerygmas [preaching or proclaiming the Good News] preserved in the Church, some we possess from written teaching and others we receive from the tradition of the Apostles [2 Thes 2: 15; 2 Tim 2: 2; 1 Jn 2: 24] handed on to us in mystery. In respect to piety both our of the same force. No one will contradict any of these, no one, at any rate, who is even moderately versed in matter ecclesiastical. Indeed, were we to try to reject unwritten customs as having no great authority, we would unwittingly injure the Gospel in its vitals; or rather we would reduce kerygma to a mere term. For instance, to take the first and most general example, who taught us in writing to sign with the sign of the cross those who have trusted in the name of our Lord Jesus Christ? What writing has taught us to turn to the East in prayer? Which of the saints left us in writing the words of the epiclesis at the consecration [prayer the priest prays at every Mass that the Holy Spirit will change the bread and wine into the Body and Blood of Christ] of the Bread of the Eucharist and of the cup of Benediction? For we are not content with those words the Apostle or the gospel has recorded, but we say other things also, both before and after; and we regard these other words, which we have received from unwritten teaching, as being of great importance to the mystery."

"Where is it written that we are to bless the baptismal water, the oil of anointing, and even the one who is being baptized? Is it not from silent and mystical tradition? Indeed, in what written word is even the anointing with oil taught? Where does it say that in baptizing there is to be a triple immersion? And the rest of the things done in baptism,--where is it written that we are to renounce Satan and his angels? Does this not come from that secret and arcane teaching which are Fathers guarded in a silence not too curiously meddled with and not idly investigated, when they had learned well that reverence for the mysteries is best preserved by silence . . . . In the same way the Apostles and Fathers who, in the beginning, prescribed the Church's rites, guarded in secrecy and silence the dignity of the mysteries; for that which is blabbed at random and in the public ear is no mystery at all. This is the reason for our handing on of unwritten precepts and practices: that the knowledge of our dogmas may not be neglected and held in contempt by the multitude through too great a familiarity. Dogma and kerygma are two distinct things. Dogma is observed in silence; kerygma is proclaimed to all the world."

956
[On Ps 7, no. 2] "A man is under sentence of death, knowing that there is One who saves, One who delivers, says: 'In you I have hoped, save me' from my inability 'and deliver me' from captivity [Psalm 7:2]. I think that the noble athletes of God, who wrestled all their lives with the invisible enemies, after they have escaped all of their persecutions and have come to the end of life, are examined by the prince of this world; and if they are found to have any wounds from their wrestling, any stains or effects of sin, they are detained. If, however, they are found unwounded and without stain, they are, as unconquered, brought by Christ into their rest [in heaven]."

Eulogies on the Martyrs and Sermons on Moral and Practical Subjects [ante A.D. 379]

968 [On baptism, 13, 5] "For prisoners, Baptism is ransom, forgiveness of debts, death of sin, regeneration of the soul, a resplendent garment, an unbreakable seal, a chariot to heaven, a protector royal, a gift of adoption."

975 [229] "The same rationale is observed in the declaring of one's sins as in the detection of physical diseases. Just as the diseases of the body are not divulged to all, nor haphazardly, but to those who are skilled in curing them, so too our declaration of our sins should be made to those empowered to cure them [John 20: 21-23], even as it is written, 'You that are strong, bear the infirmities of the weak' [Rom 15;1]; that is, carry them by means of your diligent care."

977 [288] "It is necessary to confess our sins to those to whom the dispensation of God's mysteries has been entrusted. Those doing penance of old are found to have done it before the saints. It is written in the Gospel that they confessed their sins to John the Baptist; but in Acts they confessed to the Apostles, by whom also all were baptized."[see Acts 19:18; James 5:16; 2 Cor 2: 10]